The regional phone booth: a stark reminder of the influential role Telstra has played in shaping contemporary Australia.

Telstra is famous for providing Australia’s most expansive regional telecommunications coverage, as well as being infamous for providing us access to some of the more frustrating overseas call centres. Behind the scenes however, a different tale is being written.

In 2011, Telstra did something drastic that affected the future of their global operations: they became a signatory to the UN Global Compact (UNGC). We might ask about the reasons for making this commitment as there was certainly no legal or financial obligation to do so. It seems more likely that there was a tipping point at an executive level, underscoring a desire to create a more sustainable way of doing business.

Becoming a signatory to the UNGC is no mean feat. Adding real environmental, economic and social value to the wider community is a complex process in the context of continuing to run a profitable business, not to mention having to work to the stringent reporting standards required by the Compact. CEO David Thodey is most likely the driving force behind this monumental shift; he is already known for his thought leadership on equity and diversity issues, most recently as a Male Champion of Change, so a commitment to wider sustainability is not an unrealistic step for him.

Telstra’s evolution was, and continues to be noteworthy due to the sheer size of the business they are trying to develop; drilling down through all the levels of the organisation would represent significant cost to the group. To give you an idea of the scale of Telstra’s operations, here are some quick stats: (for the purposes of this discussion, all figures will reflect the 2012/2013 financial year unless otherwise stated). Telstra is a big corporate that three years ago wanted to make a change, but have they really managed to embed CSR practices across the organisation? How would we even know for sure? Structured reporting mechanisms enable better measurement of progress however some degree of scepticism is healthy when the results are reported from within the organisation. Having said that, Telstra has to comply with the UNGC Index and Global Reporting Indicators (GRI’s) – reporting structures designed to be transparent and provide a more balanced picture.

The GRI/UNGC Index point G3-EC1 requires reporting on economic value generated and distributed. A large part of this focuses on community impact and investment. High-level review shows the total value of Telstra’s social and community contributions reached $231 million (over the 2012/2013 financial reporting period). This investment was directed strategically across three broad streams, tabulated below: 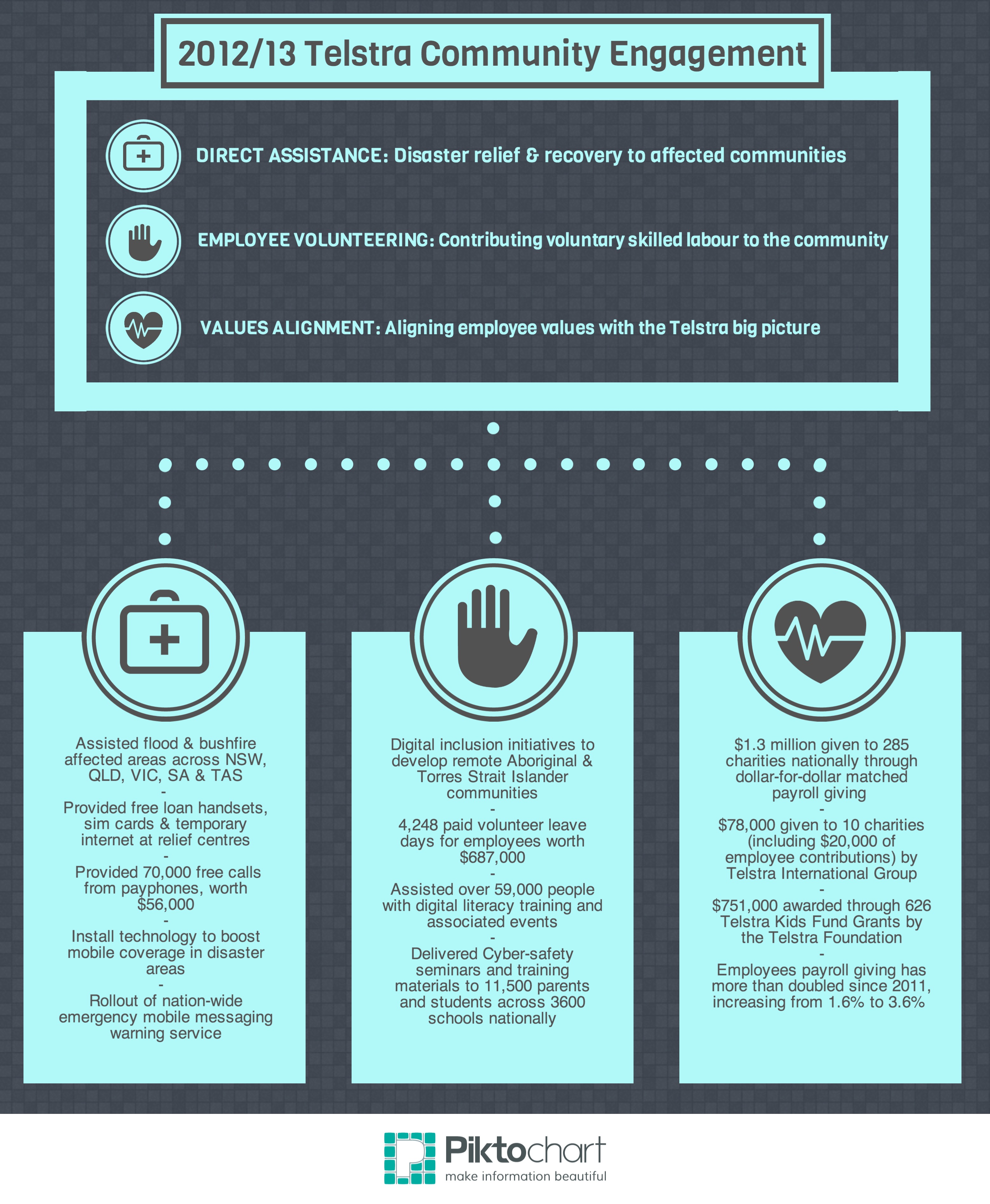 It is clear that Telstra has invested heavily in this project. It’s easy to quantify payroll giving and grants, however the manpower, infrastructure and supply chain costs for direct assistance to disaster relief and communities may well equal or surpass those of direct financial assistance. It is significant that Telstra is willing to invest non-cash assets and capital in the community in ways that may not make it easy to assess the direct return on investment.  Perhaps this indicates a long-term vision based on a desire for the Telstra brand to become synonymous with community engagement and CSR.

Furthermore, these initiatives enable Telstra to capitalise on the goodwill that results from this service-oriented philanthropy, and further immerse itself in these communities. This is a very strategic move, as it incorporates the Telstra brand into our Australian national identity; remote families, education, child safety, emergency relief and social welfare are some of the more powerful keys to becoming a household name for future generations.

However, CSR is not just about deriving benefit from external giving and goodwill, it’s about changing the inner workings of an organisation to enable stronger returns to community. As noted previously, Thodey’s ‘Male Champion of Change’ status promotes gender equality nationally and he has made sure that his company follows suit. When compared to the national average of other publicly listed companies, Telstra is above average in the percentage of women at executive management and board level: 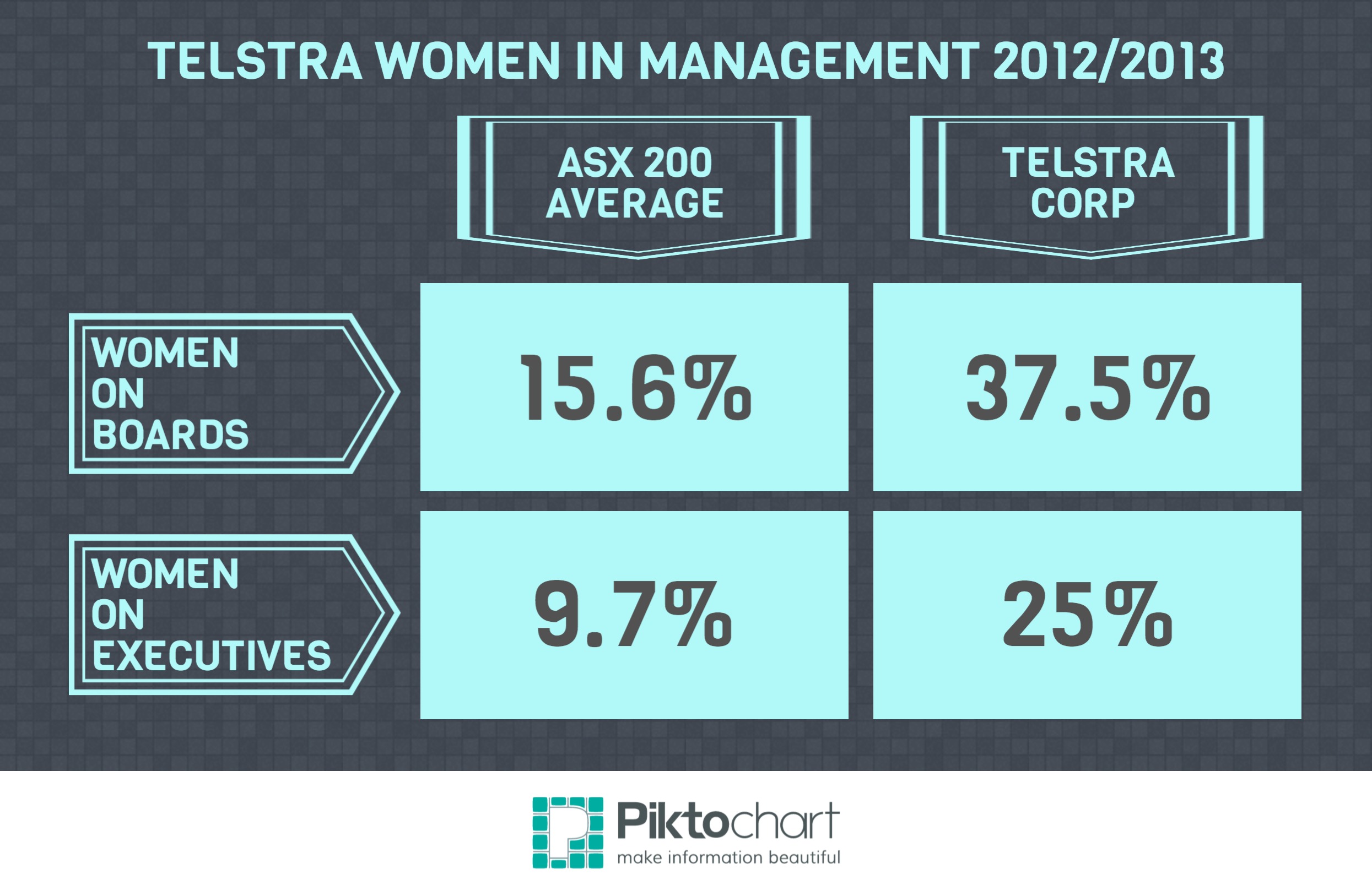 This commitment to female representation across the organisation has led to decreased female turnover and a higher female graduate intake of 40% for 2013. For the upcoming financial year the executive group has committed to address pay-equity gaps and promotion rates, reporting metrics against the 2012 Workplace Gender Equality Act. Thodey has made himself available to female staff at ‘CEO Roundtables’ to discuss improved support of the female employee cohort.

Telstra has improved its other diversity and inclusion initiatives, focusing on flexible work arrangements to support work/life balance, and nearly tripling its indigenous employment program (increasing its trainee intake from five to 16 in 2013). Along with improving support and accessibility for employees with disabilities, it also enhanced its status as an employer of choice for GLBTI employees. By committing to a strong partnership with the Parliamentary Friends of GLBTI Australians group, discrimination and bullying mitigation efforts have been embedded further; a new network of straight allies has also led to a more open culture of tolerance and acceptance to all forms of diversity.

So what value does this media-friendly social investment create for the telecom giant? Two major benefits are employee engagement and retention.

As of 2013, Telstra’s employee engagement sits at 79%, two points from the previous year. It has done so by creating more alignment between staff and organisational goals. In addition to those mentioned previously, other initiatives include the creation of a Telstra alumni program (for former employees) and further non-cash incentives to promote health and wellbeing. These myriad improvements have led to a marked improvement in retention, with employee turnover dropping from 13.3% in 2011 to a healthier rate of 11.3% in 2013. It has also resulted in an increased rate of employee payroll giving – seeing a 225% growth from 1.6% (2012) to 3.5% (2013) engaged in the program.

Engagement leads to increased productivity: employees understand that a commitment to the organisation will result in real-world non-cash benefits for the individual. This reciprocal relationship leads to employee innovation and a culture where the employee feels truly valued. This understanding within Telstra is augmented by the company’s investment in staff training and development of around $1,116 per employee per year (spending more per person on average than roughly 78% of employers nationally).

There are many other incremental ways in which Telstra is gradually improving its CSR mandate, which are yet to have visible effect on the organisation. Additionally I have not reviewed Telstra’s environmental sustainability efforts, as it is not the focus of this discussion. Certainly these efforts have had a positive effect on Telstra’s operations; since signing the UNGC, carbon emissions are down by 33%, office printing/paper usage is down by 24%, and they have recycled over 14 tonnes of mobile phones and accessories through its Mobilemuster initiative in the last 12 months. These environmental improvements have affected Telstra’s sustainability and internal efficiency, rather than having directly impacted the community.

Telstra obviously sees the potential non-cash benefits to being a responsible corporate citizen and it is good to see that it is paying as much attention to its human capital as it is to its infrastructure. Developing teams and making them a priority is the first step to building a truly future-focused organisation.

What remains to be seen is whether Telstra has the ability to continue this process and realise the potential gains from investing heavily in its economic, social and environmental sustainability. The reporting process is rigorous and demands vigilance and review; it is not just about maintaining the status quo, but improving it. This will be a focus for Thodey, but more for the organisation’s Chief Sustainability Officer Tim O’Leary who since the signing of the UNGC has been responsible for implementing these changes. Assuming that Telstra continues with incremental improvements, what are its next strategic milestones? Uplifting Tim O’Leary’s CSO role to the executive management team would be a way of giving sustainability a real voice at the table, as would lobbying and actively leading other businesses to become more sustainable. They have recently begun to work with other Aussie telco’s, so it looks like they’re up to the challenge.

With a diverse board and a CEO that is visibly engaging with these concepts, perhaps this digital giant will continue to grow and rally its ASX colleagues and begin the real fight for a more habitable and more sustainable future.