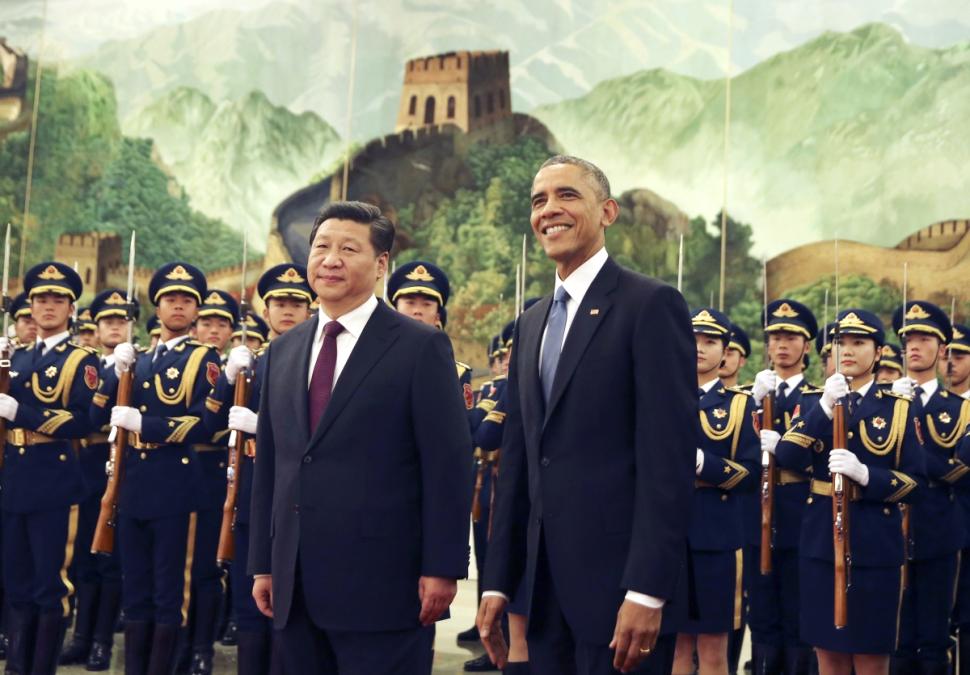 The news on everybody’s lips at the moment is, of course, the landmark decisions revealed yesterday by the US and China. For those who missed it, US President Obama announced that the USA would cut its carbon emissions by 26%-28% (from 2005 levels) by 2025, and Chinese President Xi Jinping announced that China would peak emissions by 2030, and aim to get 20% of its energy from clean/zero-carbon emission sources by the same date.

For the US, this is a grand policy augmentation, buoyed by sentiment from the UN Climate Summit and apparently nine months of talks with China. For China, this is a monumental policy change, and one that will begin to mitigate the effects of China’s horrendous air pollution and increasing dependency on coal and other fossil fuels.

What has been made clear by this green declaration by the worlds two largest economies, is that their neighbour to the South (the one about to host the world for the G20 Summit – you know the one), is not able to be a part of the discussion. There is strong pressure now and a glaring spotlight on Tony Abbot due to his reluctance to come to the table on this issue, adding to his Government’s lacklustre ambitions and policy development on the subject. Although there has been some movement on the subject in the form of the Direct Action Plan, it pales in comparison to the clear and deliberate nature of policies extolled by other nations – regardless of their direction or intent. 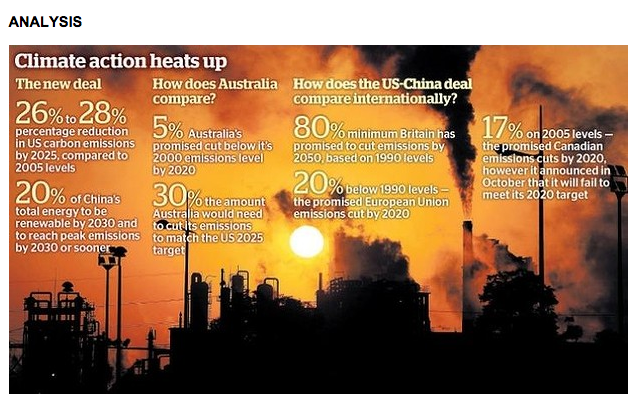 In addition, Tony Abbot’s vehement opposition to giving climate change a voice at the G20, may act to his detriment; Abbot stated that climate change was not an economic issue hence it would not be a part of official talks, yet with the US and China now acknowledging some form of economic effect or policy change in this direction (along with the majority of other G20 participants), it will be difficult to exclude it from conversations. Despite discussions of Sino/US Free Trade Agreements, there will be significant costs over the next 15 years for both economies as they begin the task of moving towards higher renewable energy consumption. Not only will this affect the global coal supply and demand model (upsetting Australia’s coal trade with China), but it will open up international opportunities for research and development into new renewables and zero-carbon technologies.

Currently the Australian Government’s position does not fully account for even these basic macro changes, so the question remains: Will Abbott be able to appropriately represent Australia’s interests to a meeting of nations taking place under the momentum of climate change initiative?

Opposition Leader Bill Shorten doesn’t believe so. In a scathing radio interview yesterday with the ABC in Melbourne, he noted the following sentiments (referring to climate change and the upcoming G20 Summit), conveniently recorded by the ABC Radio’s Twitter page:

Shorten finished his tirade saying that “we are irrelevant in the greatest economic discussions of our age” and that “what is significant for Australia now is that Tony Abbot’s policies won’t get us anywhere near the targets we agreed to”. A despondent sentiment from the Federal Opposition Leader, that has not yet been countered by Tony Abbot, on account of his South East Asian ASEAN trip.

The ball is now in Abbott’s court as to how he will respond to the movement of these global leaders, and the derision of his own Opposition. The real test, however, will be to see if he can maintain his climate change scepticism and simultaneously be a powerful force enough to retain legitimacy in the global arena, and see collaboration on new multilateral policy crucial to Australia’s development.