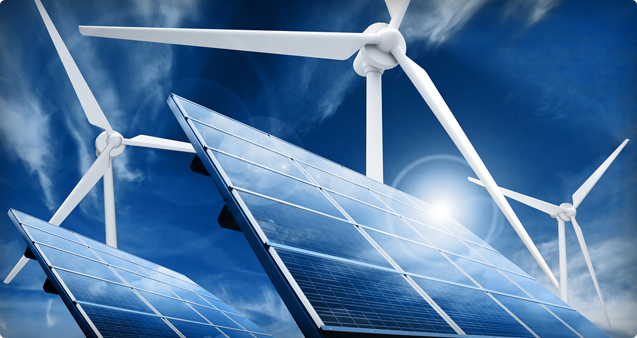 Earlier this week we talked about Australia’s energy mix in the context of the global renewables market, but it’s important in this conversation to understand our own energy market. Currently our renewable electricity generation stands at 14.76% of total output, and the breakdown of that mix is below: 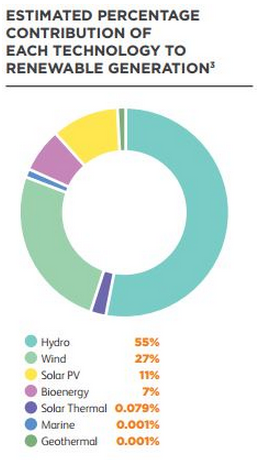 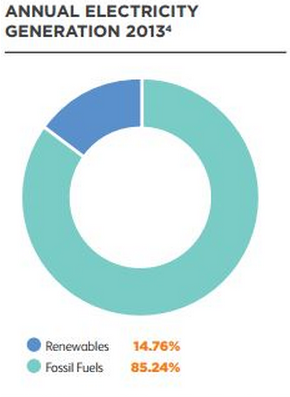 Australia’s total electricity consumption stands at 213,500 Gigawatt hours (GWh). Renewable energy accounts for 34,750 GWh of this, producing enough power for 4.9 million households for a year (2013 figures). Hydro, wind and solar PV will be the focus of our discussion as they make up 93% of our current renewable output.

At 55% of total output (19,112.5 GWh), hydroelectricity accounts for the majority of Australia’s renewable energy, and the biggest hydroelectric plant in Australia is in the Snowy Mountains Scheme in New South Wales. Built between 1949 and 1974, the Scheme consists of sixteen major dams; seven power stations; a pumping station; and 225 kilometres of tunnels, pipelines and aqueducts. All in all, this enormous hydroelectric generation system produces a whopping 4,500 GWH, and distributes it out across New South Wales, as seen below. 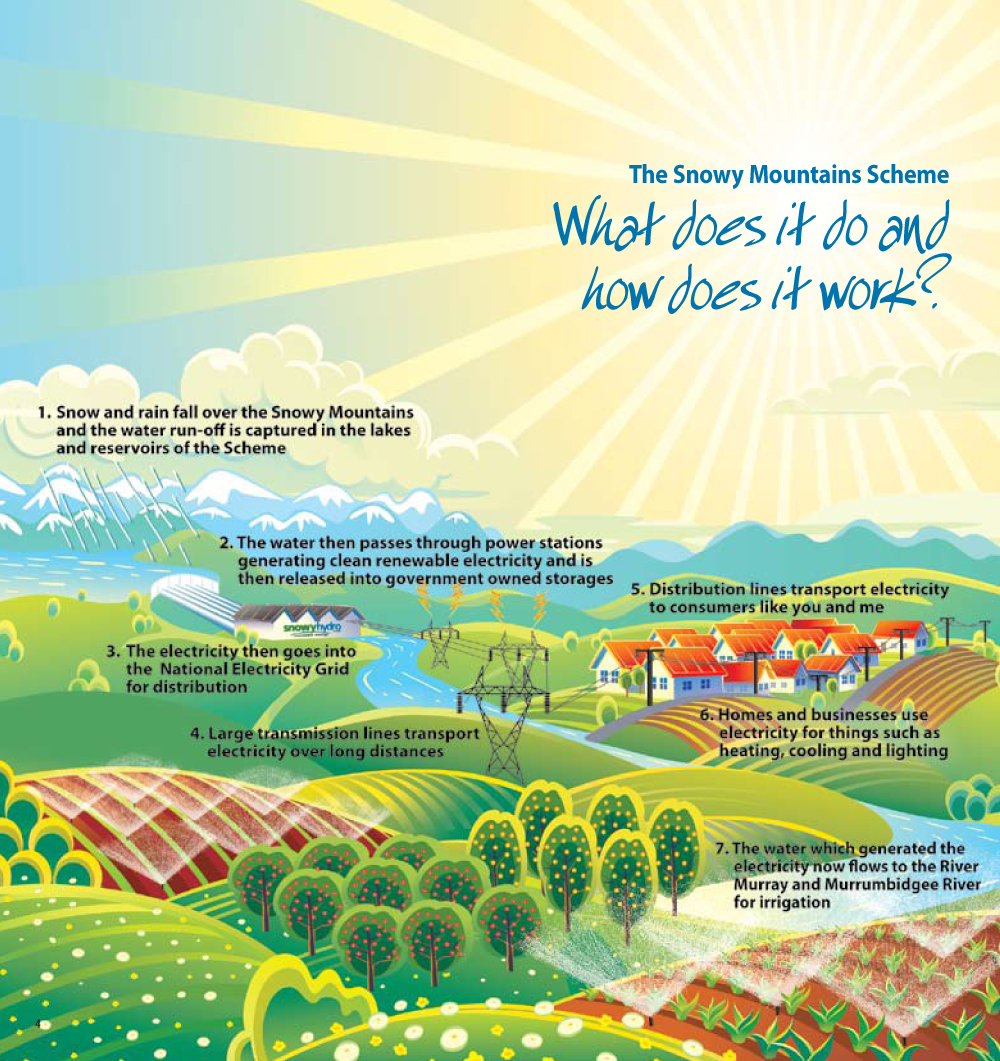 In Western Australia, the next frontier of hydroelectric power is underway; The Carnegie Wave Energy Project is nearing completion and will be “the world’s first commercial-scale wave energy array connected to the grid [that] has the ability to produce desalinated water”. Pretty exciting stuff!

Wind energy accounts for 27% of Australia’s renewable energy, adding 9,382.5 GWh to the national electricity market. As of January 2014 there were 1639 wind turbines spread across 68 wind farms nationally (as well as a really small one in the Australian Antarctic Territory). Currently, Australia’s biggest array is the Macarthur Wind Farm in western Victoria, which is also the largest in the southern hemisphere. Owned by AGL Energy, it was completed in 2013 at a cost of $1 billion, and after the Snowy Mountains Scheme, is the biggest (completed) renewable energy project in Australia. Macarthur Farm produces 957 GWh, enough to power 220,000 homes annually. Whilst less energy intensive than hydroelectric plants, there are more wind farms around the country than hydro plants. The majority of these are located in South Australia, with the state playing home to around 50% of Australia’s wind farms, which accounts for 28% of the state’s electricity supply. 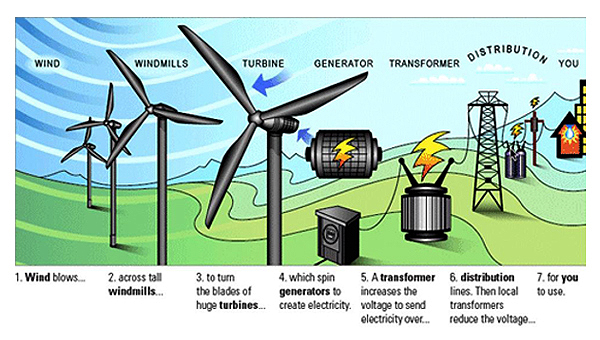 Australia’s wind energy portfolio is experiencing a steady growth rate; the most recent addition is the Ceres Project in South Australia, a 197 turbine farm to be built by Senvion Australia. Once completed, the $1.5 billion operation on the Yorke Peninsula will generate 1,725 GWh of electricity for over 225,000 homes and steal the title of Australia’s largest wind farm. It is slated for completion in 2016.

Photovoltaic (PV) cells are the individual pieces that make up solar panels, which in turn become solar farms, solar hot water systems, and small scale solar systems. These Solar PV arrays account for 11% of our renewable energy (3,822.5 GWh), with more than 213,200 small systems installed in the 12 months to Jan 2014.

In terms of large scale solar arrays, the largest in operation is the Royalla Solar Farm, owned and operated by Fotowatio Renewable Ventures (FRV), a Spanish renewable energy company. It is located just south of Canberra in the ACT, which was only commissioned in September 2014. It is made up of 83,000 individual solar panels, and is expected to generate 37,000 Megawatt hours (MWh) of electricity annually – enough to power 4,500 Canberra homes. 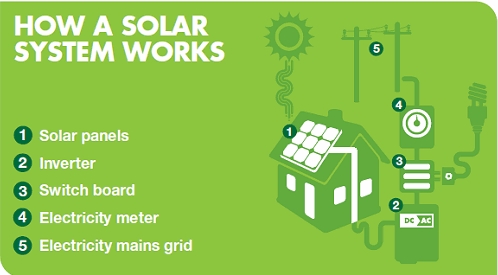 Not to be outdone, New South Wales is increasing its solar capacity, with AGL Energy installing the first of 1.35 million solar panels across two locations (Nyngan & Broken Hill) for its large scale Solar Project. Once completed in June 2015, the  AGL project will become the largest in the country,  generating 360,000 MWh of electricity annually, enough to power 50,000 homes. For such large scale design (when compared to hydro and wind) solar power is relatively inefficient. The benefits of solar in Australia is that we have so much strong sunshine and so much available land that we can afford to build more and more arrays.

Out of the three energy sources discussed above, solar PV energy has the most potential, due to its design and scalability. Small units can attach to existing infrastructure with little or no impact to the surrounding environs, whilst simultaneously meeting the energy needs of that building/home. Aside from efficiency, the biggest issue with solar (as with  wind power) is storage: these energy sources experience daily troughs and peaks, and until there is a cost effective scalable storage method, it will be difficult to utilise solar energy on an industrial scale. Having said this, Australians have created another world first, with scientists at UNSW achieving 40.4% efficency from PV panels, up 4.4% from the average 36% efficiency of standard panels. It stands to reason that if Australians are capable of these technological improvements, surely the storage issue will not stump us for long.

Australians are a smart bunch, and it’s exciting that our solar energy research and development is at the forefront. Although national energy demand and consumption has been declining in recent years, these projects show a promising start to 2015, and they tell us that Australians do want change and that more and more people everyday are paving the way forward. Who knows what we can achieve if we put our minds to it?