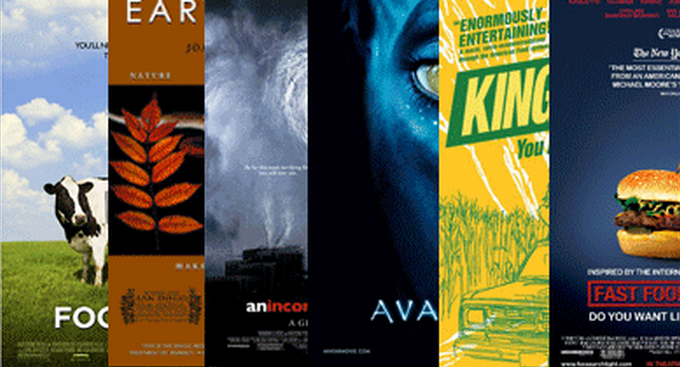 It has been a while, but don’t worry we haven’t forgotten! This edition of 6 Friday Things looks at six recent blockbuster films that comment on the importance and delicate nature of our environment and sustainability. You can rest easy – there are no spoilers!

Interstellar is a visual epic and a narrative masterpiece that takes you through the entire gamut of emotions, whilst at the same time delivering a eerily realistic portrait of Earth’s future. We see earth as a burgeoning wasteland, an ever increasing dustbowl in which the effects of environmental degradation have led to a blight on crops and the global ecosystem of natural produce that we need to survive. This film is a quest to sustain human life away from Earth, and we see the stark reality over many years – the desperation and tenacity of the human spirit to weather this crisis. It is interesting that the film comments more generally about the human impact on the environment, rather than speaking specifically about global warming, which, during the film’s conception and production have been huge social issues. What the film does instead, is comment on how important the environment is for humanity, and shows us the ways that we would soon become completely immobilised without it. Interstellar stars Matthew McConaughey, Ane Hathaway, Michael Caine, Jessica Chastain and a particularly sassy robot that you won’t want to miss.

If you haven’t already been blown away by this film, it is best enjoyed with people who enjoy physics, sci-fi and generally brilliant epic movies.

The Lorax is a lighthearted childrens film, based on the magical tale by renowned Dr Seuss. It centres around the story of a young boy and his quest to impress his sweetheart by finding a real living tree in a world where they no longer exist. When he stumbles upon the Lorax, he also stumbles upon the embodiment of the environment and of hope, which has been downtrodden by humanity into a last, secret and delicate ecosystem, which we find is still at the mercy of humanity. This piece manages to d what few others do, in that it shows us the widest variety of points of view on the environmental conservation issue – from the die hard eco-warrior (the Lorax) and the newly aware conservationist to the fearful status quo, and the antagonist who is worried that a re-emergence of conservation idealism will destroy his business empire. The film is beautifully told, with the same sense of childish delight we expect from a Dr Seuss rendition. It features the voice talents of Zac Efron, Taylor Swift, Betty White and Danny DeVito as The Lorax.

The Lorax is best enjoyed with or without children, but definitely in the company of friends.

If you haven’t heard of Wall-E, you have been hiding under a dusty rock somewhere – who hasn’t seen the Disney tale of the curious and adorable yet lonely robot that unintentionally saves humanity from itself? The story focuses on the plight of Earth, 700 years in the future, when humanity has left to sustain itself, leaning the planet’s clean up in the hands of small robots. The Earth is given a voice through the unexpected protagonist – Wall-E, a robot with a personality, and a conscience. He is the medium through which the film condemns consumerism  and the destruction of our landscape. It is only through the efforts of this central innocent character (read: the Earth) that humanity can see the folly of its fallen empire and take steps to re-nurture the environment. Like the Lorax, it does give us hope – it shows us that life will find a way, and that even in the midst of global turmoil, plants can still grow and the smallest person can make a world of difference.

Wall-E features almost no voice actors, and is fascinating to watch as a movie defined by an almost purely physical medium. Best enjoyed with the young at heart, who love adventure and a good helping of sweet sweet romance.

This Academy Award winning documentary film came out in 2006, around the time that the climate change movement was really starting to take hold. It is hosted and narrated by former US Vice President Al Gore, and nearly eight years ago was the most alarming non-fiction climate change narrative produced. It is a blunt and terrifying piece of cinema that really paints a picture of a steady and irreparable decline for the planet – it’s the sort of film that uses empirical evidence and scientific data to hit you emotionally, giving you that feeling in the pit of your stomach that something is really, really wrong. Many years on, society has made changes, and governments are beginning to circumvent some of the problems we face, yet this film serves as a stark reminder of what is happening and what could happen. There are two sides to the coin however, and An Inconvenient Truth received its fair share of criticism. Many felt the film was ‘…a biased presentation to exploit the fears of the public for [Al Gore’s] own political gain…’, in addition to others who felt the doco had distorted the facts and was a climate exaggerator – only presenting some parts of the issue. Either way, it’s worth watching to see how far we have come socially in the last decade on this issue, and to see where the climate change movement really began.

An Inconvenient Truth is best watched with environment enthusiasts and climate change deniers as it will make for a hilariously heated discussion – one that you may take part in, or simply watch from behind a bulletproof screen.

Straight up, this film is hilarious. And ridiculous. Starring Luke Wilson and a number of the cast members of Saturday Night Live, this film presents a parody of the human race – showing us what life would be like if humanity’s most intelligent stopped breeding, and the least intelligent stepped it up a notch. The result of this deft theory is a brilliant dismissal of human potential, one that leaves us with Average Joe suddenly becoming the smartest man in the world. What did we tell you? Hilarious. Watch the shenanigans unfold. The interesting part of this film is how they have chosen to represent the environment in this pathetic vision of the future. Humanity’s lack of ingenuity and intelligence has left them without the ability to manage and care for the natural environment – and this suddenly finds our central characters in a pickle. The film takes a sharp turn and is suddenly following a satirical version of a government that has to scramble to come up with a working environmental policy. Whilst thinking hard about the science doesn’t necessary allow this future to actually pan out, it is a fun way of looking at the potential downfall of humanity and the planet.

This is  childhood classic, and makes the list because it is awesome, it is the first incarnation of the James Cameron epic Avatar, and also because it is set in the rainforests of Queensland! This is definitely an 90’s environmental fantasy meant for children, complete with faeries, talking animals, singing and dancing. Fern Gully brings us the tale of a faerie community in the Australian rainforest that faces possible extinction when threatened with humans and deforestation. It is only when a human unexpectedly takes the form of one of the faeries (indigenous rainforest peoples) that they truly have a chance. Sound familiar? Well it should – because it’s pretty much the same story as Avatar, except it was released over a decade before. This film gives us a child-level look at the deforestation issue, and shows us the effects of this on local flora and fauna, and the faeries give nature a voice and – in a child appropriate way – simply tell us what is happening, and why it is wrong. It is a fun tale with highs and lows, delightfully evil villains, and wonderfully noble heroes. It features the voice talents of Christian Slater, Tim Curry and the late Robin Williams as ‘Batty’ a slightly deranged fruitbat with a penchant for rap (in true Robin Williams form, Batty is hilarious!)

Best enjoyed with children young and old, or even if you just want to compare it to Avatar. Which you should. Because it’s uncanny.