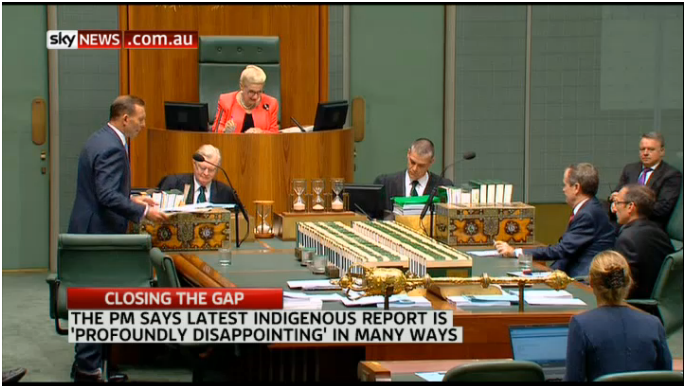 Yesterday the Federal Government revisited its Closing The Gap Report, and the findings of the government’s progress one year on have been, in the words of Prime Minister Abbott, ‘profoundly disappointing’. This is the seventh document produced since the Closing The Gap principles and targets were handed down by the Council of Australian Governments in 2008. It targets high mortality rates and widespread health problems; higher unemployment rates; and lower literacy and education rates in Aboriginal communities around Australia.

12 months ago the Abbott Government produced its first Aboriginal Affairs strategy paper, detailing how the Federal Government would fight the iniquities facing Australia’s indigenous population, and yesterday he tabled the follow up report in Parliament.  Abbott’s 2014 report was soon followed by The Forrest Report in August 2014, which discussed the need for a completely different approach to indigenous affairs, focusing on education as the ‘silver bullet’ that could end disparity across all other issues. Both reports called for a national approach and agenda, with strong governmental leadership at all levels matched by equal input and leadership by the business community.

The findings of the 2015 Closing The Gap Report are not encouraging. Of the six main targets seen below, only two were judged as still being ‘on track’ to meet proposed levels. With this said, there were at least some small improvements in some education and health standards, so it hasn’t been a total loss: 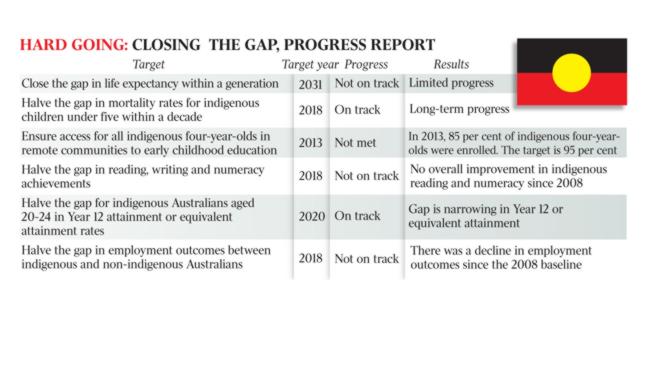 Closing the Gap Targets and progress – courtesy of The Australian Newspaper, 11 Feb 2015

The Opposition has obviously taken the opportunity to berate the Abbott Government for their shortcomings over this issue, however the progress (or lack thereof) must be attributed to the government as a bipartisan whole.

Although SustainingPeople is by no means an authority on indigenous affairs in Australia, it appears that perhaps these targets were somewhat ambitious, and that systems and processes set up by various governmental and non-governmental organisations were not able to force progress – and neither should they have been able to.

Theses issues, as described above, are the result of compounding many years of racial disharmony coupled with federal legislation and policy that did not appropriately attend to the long term physical or cultural needs of our First Australians. It has been seen around the world with numerous other indigenous populations, that simply putting in place idiosyncratic rules, imposing alien cultural norms and throwing money at a problem will not make it go away. In the case of early childhood education, cultural differences ensure that schooling is often not seen as a priority by parents or older family members in indigenous communities; this leads to lower attendance rates and subsequently decreased employment (as compared to non-First Australian attendance and employment rates). Cultural disconnect is an issue discussed by Mellor & Corrigan’s 2004 report for the Australian Council for Education Research (ACER), an example of which is seen below.

In many Indigenous cultures, males7 undergo initiation at around 12 years old and are subsequently treated as adults (see Groome & Hamilton, 1995). However, when these males attend secondary school, they are treated as immature and denied significant independence and autonomy, which they are allowed at home. In addition, many Indigenous students have to move away from their local community and family in order to attend a secondary school (Buckskin, 2001). This loss of support further compounds transition for those students (Smith, 2002).

Cultural differences like this are often not taken into account by policy, and programs are rolled out that don’t accommodate the needs of children (or adults) in their contemporary idiom.

Issues like high mortality and diabetes are also often not fully understood in Indigenous communities, so the repercussions of lifestyle changes and general nutrition information are not being passed down to children in the family/wider community. This in turn (as it has done over the last few generations) has had a negative exponential effect on the health and wellbeing of the current Indigenous population of Australia, as children grow to become parents and pass on the lessons that they have been taught (or in this case, NOT taught).

To effect real systemic transformation within a population, requires cultural change and development from within, and this, as many experts will attest comes from engagement and education. The old Christian proverb comes to mind: give a man a fish and you’ll feed him for a day. Teach a man to fish and you’ll feed him for a lifetime. As The Forrest Report commented, this process is a long and slow one – it is about giving the Aboriginal people the respect, pride and self determination to preserve their culture and heritage. Indigenous Advisory Council Chairman Warren Mundine has said that Indigenous Australia ‘is looking for a hand up, not a hand out’. A particularly apt and poetic statement. 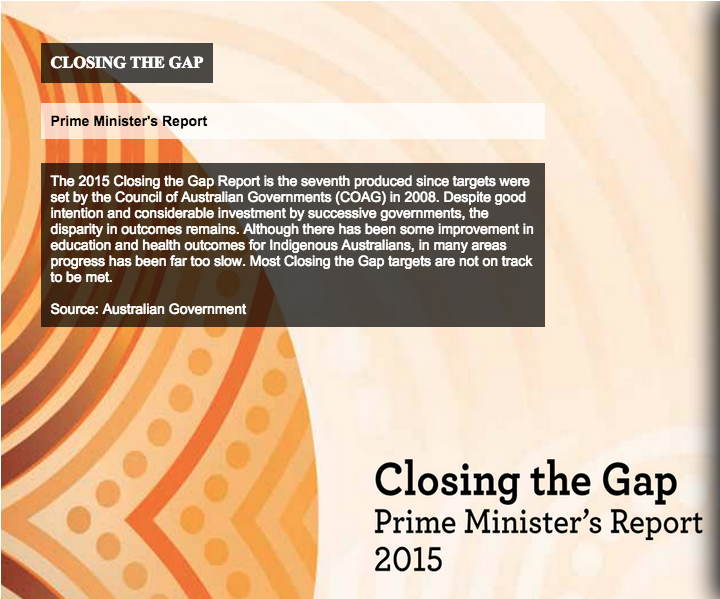 As we wrote in a SustainingPeople article in October last year, it is important that big business ( and medium and small business) contribute to this cause, through education, training, mentoring, and improving access of indigenous businesses to wider Australian and international markets. This combined with improved healthcare tools and health education will result in long term change: Those young men and women with greater access to education and employment opportunities are more likely to take these skills and this knowledge back to their communities, not only giving their families the tools to improve their immediate situation, but are ingraining in their culture a stronger focus on providing the next generation with the tools to create and shape their own future.

It is no surprise that hurried reforms and 12 months of policy change has seen little change; issues formed over at least a century must have long term solutions – closing the gap will take generations. That this disparity will not be fully solved within our lifetime should not be taken as an invitation to slow progress, moreover it should be seen as a reason to double our efforts as a nation, to incite our entire population to enable the next few generations of indigenous Australians build a better future. It is an exciting opportunity, that (with the right encouragement) our children and grandchildren will seize with both hands, but it will be a real achievement to see the gap close a little more each year, and to see the strength and beauty of Aboriginal culture strengthen and grow with each generation.