A new Australian documentary has catapulted the issue of coal seam gas mining into the political arena, spotlighting the contentious debate over health, safety and water contamination concerns that has been simmering in rural communities across New South Wales and Queensland in recent years.

The Frackman follows the story of Dayne Pratzky, a Sydney-sider turned rural Queensland resident who becomes an extremely vocal anti-fracking activist after coal seam gas (CSG) production begins near his home. The film is described as reminiscent of The Castle in that it follows the story of a typical Aussie battler and his family fighting against a large corporation for the good of the community.

The doco makes no attempt to hide the fact that it is sensationalist. It aims to incite anger and panic about the potential dangers of CSG mining to Australian communities. As it paints Pratzky as the ‘unlikely hero’ of the piece, it equally demonises those from QGC and the Energy Resource Information Centre (ERIC). The bias is clear, and ERIC has commented publically that The Fackman is ‘more fiction than fact’. On their website they discuss their misgivings; from alleged misrepresentations in the film and clearing up the facts about CSG mining. 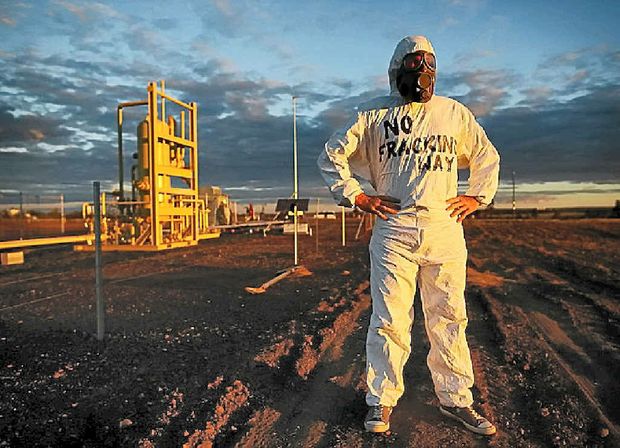 Flip the coin and you see the broader intentions of the film, which is to alert communities to the activists’ concerns over fracking – not just on our families and communities, but also on our environment. It also seeks to question the involvement of government in csg production and asks if the government’s ability to serve its constituents is compromised by the deep pockets of energy companies.

When the trailer for the film was released only recently, it clocked over one million views in ten days, which for a minor Australian documentary is unusual. Certainly the film has had strong and visible help from many public personalities including heavyweight radio broadcaster Alan Jones and former Greens leader Bob Brown.

The film resonates with the public partially because it taps into a growing desire for Australians to conserve resources and to move away from fossil fuels. Whilst coal seam gas is reliable and produces 50% fewer emissions than coal, it is still a fossil fuel, meaning it does produce significantly more emissions than renewable or clean energy. Not to mention the vast water resource that is needed for the hydraulic fracturing process, which can lead to contamination of the resource. Add this to snowballing global concerns over climate change, and the growing divestment movement, and you get real concern and outrage across the country.

The Anti-fracking movement is picking up speed and in New South Wales, at least, it appears to be gaining momentum as a real political campaign issue ahead of state government elections next Saturday. If Labour wrests power from the Liberal party, we could see a total moratorium on CSG licenses and production across the state. This would see New South Wales join Tasmania as the second Australian state to ban coal seam gas exploitation.

ABC current affairs program Lateline, hosted by Tony Jones aired a story on Wednesday night commenting on the film and the political turmoil surrounding the health and environmental concerns of CSG mining. Lateline is often regarded as a precursor to political debate, so it is interesting to see them covering an issue like this – you can watch the Lateline video excerpt here.

Whether or not you agree with the sentiment of the film, the public response and current political debate shows that there is a growing awareness and concern about a number of issues, namely environmental conservation; the continued use of fossil fuels; and the role and ability of governments to appropriately represent the voice of their constituents.

It will be interesting to see how the public debate grows in New South Wales over the next week, and whether this then engages debate at a higher, federal level. Fracking is already banned in Scotland, France, Bulgaria, Germany, Romaina, South Africa, Argentina, Spain, Northern Ireland, Italy, Switzerland, Austria, The Netherlands, New Zealand and numerous states in Canada and the United States. Perhaps Australia will be next?