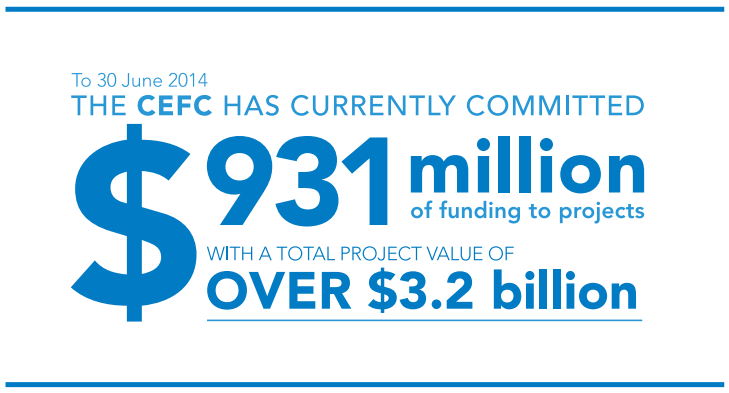 Wondering if anyone is actually investing in clean energy in Australia? Well the CEFC is investing – to the tune of $931 million.

For those of you playing at home, The CEFC, or Clean Energy Finance Corporation is an Australian government owned organisation which began investing in renewable energy projects in July 2013. Shortly after its creation by the Gillard government in 2012, the Abbott Government attempted, unsuccessfully, to abolish the CEFC and it continues its work today, focused on having a fully sustainable portfolio vision by 2018 (below).

According to the CEFC’s most recent annual report, they have increased their portfolio value exponentially since 2013, investing $931 million in over 40 projects around Australia. Combined with support from other private investors, this portfolio of projects is now worth around $3.2 billion. The projections for the 2014-2015 financial year are just as promising; over 150 proposals worth approximately $4 billion have been lodged with the CEFC, and 30 of them (worth around $1.2 billion) are progressing through the pipeline. That’s not bad for nearly two years work!

What the CEFC does isn’t exceptionally groundbreaking. Whilst their mission is to Accelerate Australia’s transformation towards a more competitive economy in a carbon constrained world, by acting as a catalyst to increase investment in emissions reduction, they are still using traditional financier models and financial instruments to create growth. What IS noteworthy however, is that they aren’t doing it alone. For every $1 the CEFC commits to a project, over $2.20 (on average) $2.20 is raised from private investors. This means there are a whole host of investors willing to believe in and back clean energy projects.

Although the RET is up in the air and there is very little security in the industry at the moment, we can take some good news from the fact that there are 150 proposals sitting on the shelf ready to go, and that there are investors out there willing to put billions of dollars into Australian clean energy development. Since 2006, global investment in renewable energy has reached $1.3 trillion, and recent projections by the world’s largest renewables provider SunEdison tell us that by 2020 the global market for solar and wind energy alone will be worth over $4 trillion.

If these projections are to be believed (and they should – the SunEdison guys are pretty brainy), then the next five years will see unprecedented growth in clean energy investments across the globe. Investment groups like the CEFC create a more attractive market environment for foreign direct investment, and this is exactly what we need in Australia during such uncertain times. Not to mention their work goes a fair ways to mitigating some of the risks created by an abolished carbon tax, a shifting RET and uncertain climate policy.

The Clean Energy Finance Corporation should continue to gain support and recognition from the general public, the government, and from private investors. As we head towards global goals of 2020, perhaps organisations like the CEFC will mean the difference between Australia being the ‘lucky country’ or being ‘left behind’.