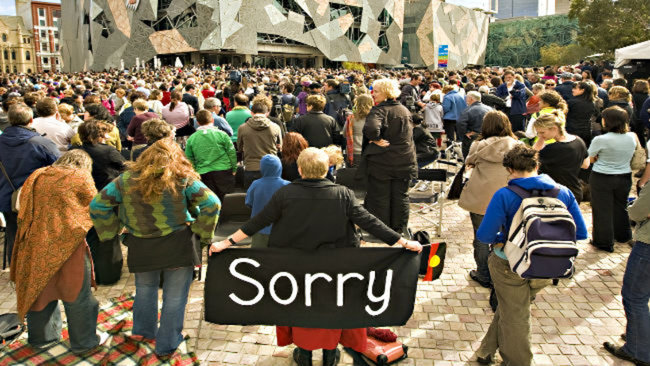 Yesterday was National Sorry Day. Did anyone realise? Certainly indigenous groups commemorated and mourned the day marking historic mistreatment of First Australians and the Stolen Generation, however there seemed be almost no acknowledgement by parliament, or the Federal Government.

This seems a far cry from the publicity machine that surrounded this day in 2008, when Kevin Rudd apologised to Indigenous Australia on behalf of the Federal Government. The Sydney Morning Herald seemed bemused by the government’s silence (amongst other news from today). Greens Senator Rachel Siewert took the opportunity to highlight that we are far from Closing the Gap on indigenous disparity, even more so than this time last year. “In Western Australia our State Government is trying to close remote Aboriginal communities, we still have deaths in custody and a disproportionate number of Aboriginal and Torres Strait Islander peoples in our prisons“, she wrote in yesterday’s media release.

Some believe that since the Government made a formal apology in 2008, there is no need to continue marking the day every year; To this we respond that whilst a formal apology has been made, commemoration is about mourning those lost; it’s about understanding the effect of these actions on an entire culture, and it’s about making sure that it never happens again. Nationwide we make a point of commemorating ANZAC Day for similar reasons; to remember those we lost, to understand the grief and the loss of an entire generation, and to make sure that it never happens again.

Perhaps as we move into the future, National Sorry Day won’t remain in its current form; there will be a focus on The Apology of course, but it could become more an opportunity for Indigenous Australia to mark the changes to, and transformation of its cultural identity, and to look to the new generations that will carry their stories and their pride forward into the future.